CBD, Phytocannabidiol has exploded on the scene greater than any other pure compound, ever.

Cannabidiol was discovered in 1940 by a US hemp plant Chemist, Roger Adams.  Israel has done the most research on cannabis.  In 1963, the actual chemical makeup was discovered by Israeli scientists.  Later in the 70’s, it was confirmed that CBD does not cause intoxication.  It is for that very reason that research was sparse.  It is sometimes called “Hippie’s Disappointment”.    In early 1990’s research on CBD was renewed.

CBDA, cannabiodiolic acid, is second most common phyto-cannabinoid produced.  THC is the first.  CBDA in the hashish flower becomes CBD when it is heated.  (decarboxilation)   In 2009, CBD’s therapeutic worth was recognized.  Some of the most common CBD’s are:  Charlotte’s Web, AC/DC, Cannatonic Harlequin, Sour Tsunami, Blue Jay Way and many others.

This is a high CBD, low THC extract marketed as a dietary supplement under Federal US laws.  It was initially bred and produced by Stanly Brothers of Colorado.  They have patented the specific strain.  The name was inspired by Charlotte Figi, born October 18, 2006.  This little girl’s disease and the control of  symptoms by CBD has opened minds to the medicinal use of cannabis.  Charlotte’s Web is bred to have less than 0.3% THC and does not cause a psychoactive “high”.  Charlotte has Dravet syndrome which causes status epilepticus, which is constant seizures.  With use, her seizures decreased from hourly to weekly.  Prior to use, Charlotte could not be toilet trained, eat normally or develop with other basic human dignities.  A special on CNN by Sanjay Gupta made her story and the stories of other therapeutic benefits available from the Cannabis plant. It opened a window to greater acceptance.

Has extremely low THC level and high CBD level.  THC is 1% to 6% with little or no psychoactive effect.  CBD levels are around 20% in comparison to just 0.05% on average.  AC/DC is a hybrid developed by a cross between Ruderalis and Cannatonic.  It is 50% Sativa and 50% Indica.  It has won awards for high CBD content  Recreational users would be disappointed because it is most like hemp.  Medical conditions that may be helped:  cancer, alcoholism, seizures and severe pain.  Users may feel an uplifting effect along with peace and happiness.  It is popularly used in edibles to mitigate the risk of intense effects of THC.  (CBD has an inverse effect of THC).

This is a unique hybrid.  It is bred by Spanish seed bank specifically for low THC levels.  (rarely above 6%)   This potentiates a short-lived high.  It is powerfully relaxing ( a hallmark of CBD)  It is often used to treat pain, muscle spasms, anxiety, migraines and a wide variety of other conditions.

First to bred for high CBD content.  Very effective at pain relief and anti-inflammatory properties.  This was initially bred by Lawrence Ringo of Southern Humboldt Seed Collective.  It is Sour Diesel crossed with NYC Diesel.

This 50% Indica and 50% sativa strain.  It has 2:1 CBD/THC levels.  This herb is used to treat nausea, restlessness, chronic pain and migraines.

CBD was primarily overlooked in favor of the psychoactive THC.  With the legalization of cannabis, the evidence of CBD’s medical benefits continue to grow in popularity and acceptance. 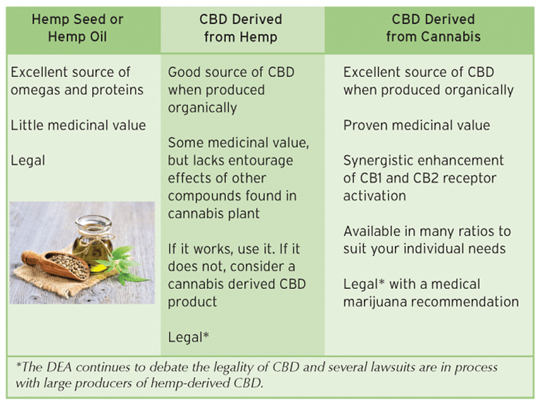 CBD is produced in both hemp fiber variety and drug variety are they the same compound? Yes, but we know from numerous studies that cannabinoids such as CBD work best when other cannabinoids and terpenoids are present, a synergy termed “the entourage effect.”  Hemp is virtually devoid of other cannabinoids and terpenoids. Also, industrial hemp contains very little CBD, necessitating a large number of hemp plants to obtain what can be obtained from one CBD-rich drug variety plant. The use of a large number of hemp plants also increases the risk of toxin contamination as hemp is a bio-accumulator, drawing up toxins from soil. (Fun fact: industrial hemp was planted around the Chernobyl nuclear power plant after the nuclear explosion in 1986). Most importantly, an excellent study from Israel in 2015 showed that whole-plant CBD, containing cannabinoids and terpenoids, was superior to single molecule CBD, with whole plant extract having a wider therapeutic window and better efficacy at lower doses. My clinical experience with thousands of patients confirms that whole plant CBD-rich cannabis is more efficacious than hemp-based single molecule CBD.