Cannabis Then and Now

Cannabis today is not the same as cannabis from the 60’s and 70’s and even the 90’s. High potency Sativa and Indica, as well as hybrids are possible due to selective breeding, modern agriculture techniques and legal information exchanged. What was a formerly illegal operation relegated to back rooms, garages and secret corners of forests or fields, is now openly grown, sold, and information shared. Modern laboratories are used, modern methodologies are implemented. Scientific methods of unit calculations of content, dosages and therapeutic and/or recreational effects can be shared, documented and improved upon. These options were hampered or outright impossible in the past, due to years of illegality.

THC, the psychoactive ingredient in cannabis, was a minute 3% compared with modern plants produced for recreation and therapeutic use that contain much, much larger amounts of THC. Since cannabis was named a Schedule 1 drug in 1970, the Natural Center for Natural Projects Research (NCNPR) at the University of Mississippi has been testing cannabis samples confiscated in U.S.  raids. In agreement with popular belief, today’s cannabis is 57-67% more potent when compared to samples from the ’70s. In this instance, potency is measured by the levels of psychoactivecontent, THC.  In addition to THC, plants are bred for the other major cannabis substance: CBD.  CBD or Cannabidiol is effective as a therapeutic substance used to treat various neurological disorders and afflictions, including epilepsy and Parkinson’s Disease.  Research is still being conducted to determine if there are other uses for the plant. By eliminating or titrating for the least amount of THC, the psychoactive molecules in cannabis, a drug can be made for effective relief of seizures without the side effects of mental impairment. This is particularly desired for pediatric use or personal preference.

In the 70’s, when cannabis became so popular, most of the product had to be imported.  It was primarily imported from Columbia. By the time it was packaged and shipped by different means of transportation, the cannabis was old. Unlike now, people were using what would now be considered unacceptable for use. It was common to use the leaves and uncommon to find a product containing the flowers that are rich in THC. In the 1980’s hydroponics or growing in water became a popular and effective method of growing the plants. This eliminated the need for transportation and allowed for hands-on experimentation and breeding, thus producing a more effective and sought-after product.

There are 28 states that allow the use of medical and/or recreational cannabis. There is also a bill pending in the House for Federal legalization of the use of cannabis. Until it is legalized under federal law, there will be confusion and possible contention between states and the Federal Government. The map below shows how prevalent legalization is becoming.

* Some cities and Indian Reservations have legalization policies separate from their surrounding states.
* Cannabis remains a Schedule I substance under federal law as of 2016.

The use, possession, sale, cultivation, and transportation of cannabis is illegal under federal law in the United States. However, the federal government has articulated that if a state passes a law to decriminalize cannabis for recreational or medical use, it can do so, under the condition that a regulation system for cannabis is in place. Cannabis is listed as a Schedule I substance under the Controlled Substances Act of 1970, the highest classification under the legislation. Part of the reason cannabis remains illegal at the federal level is because it is still classified as a Schedule I drug. A Schedule I drug, as defined by the Drug Enforcement Administration, is a substance that has a high potential of being abused by its users.

With more and more states legalizing cannabis not only for medicinal use but also for recreational use, it is inevitable that all states will have legal use. 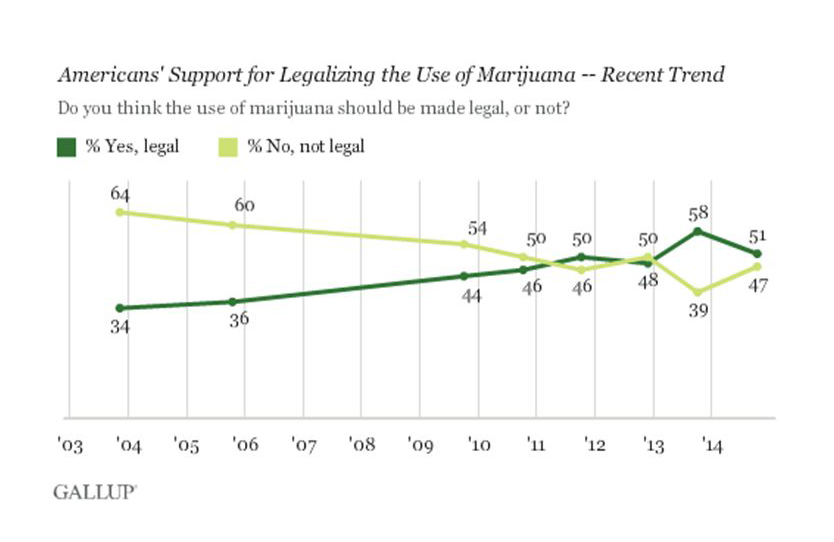 As can be seen by the trend, 50% or more of the United States voters are in favor of legalization of cannabis. With states, one after the other, making it legal, it is almost inevitable that this will progress the same as same sex marriage.  Eventually, as people become accustomed to something, they begin to agree that it is harmless. In states where cannabis has been legalized there have been no increase in use among teenagers.  Also, in states where it has been made legal, the abuse of opioids has decreased. Given these facts, there is no reason to deny people the therapeutic or recreational benefits of Cannabis.